This year, we prepared two special pages on Wikigender to give more visibility to the work done by the OECD and Wikigender partners on gender equality.

In addition, the gender team at the OECD Development Centre organised a high-level event on 9 March on “2030 Agenda: Gender Equality, Social Norms and Inclusive Growth“. See the photos of the event below: 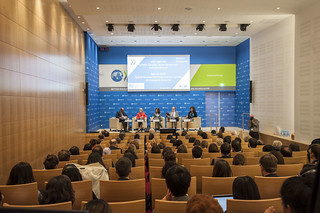 A side event was also organised on 15 March on “Tracking social norm change in the SDGs at the country level: data for evidence-based policymaking in favour of gender equality in Uganda” during the 60th session of the Commission on the Status of Women.

The UNESCO eAtlas of Gender Inequality in Education

To mark International Women’s Day 2016, UNESCO released the eAtlas of Gender Inequality in Education, prepared by the UNESCO Institute for Statistics. The report provides new evidence of gender gaps in education despite significant progress made over the past 20 years. 16 million girls between the ages 6 and 11 will never start school compared to 8 million boys.

A new infographic by the Gender and Land Rights database (GLRD) of the Food and Agriculture Organization of the United Nations (FAO) and CGIAR Research Program on Policies, Institutions, and Markets (PIM) explores the correct use of land ownership statistics (ownership understood in a broad sense beyond individual property rights) and highlights how gender can influence land rights.

News from the Land Portal

This blog post by Jolyne Sanjak, Chief Program Officer of Landesa, focuses on the interlinkages between land rights, and women’s land rights in particular, and food security.

Watch the interview with Bettie Fortuin, farm worker in South Africa representing the Women on Farms Project at the World Forum on Access to Land 2016 in Valencia, Spain.

See all recent publications from the FAO on gender here.

See all the latest featured articles from the FAO here

Updates from the FAO’s Dimitra Project

Learn more about the FAO’s Dimitra project a participatory information and communication project which contributes to improving the visibility of rural populations, women in particular. Read the most recent newsletter and watch a video on how the Dimitra project in Niger is helping women access water and land to increase food security and decrease rural poverty.

Access to water and land: Dimitra clubs in Niger

This short video shows how the FAO Dimitra Clubs in Niger have been crucial in ensuring women’s access to land and water, while contributing to nutrition, food security, gender equality and reducing rural poverty at the same time. The transformative approach of the Dimitra Clubs induces behavioural changes in various aspects of daily life for individuals, households and communities in rural areas. Dimitra Clubs are groups of rural women and men who voluntarily decide to get organized to discuss their development challenges, find solutions and take collective action in an effort to improve their livelihoods and take control of their own lives.

Stay tuned via the Community Portal!

The Community Portal is where you can access the latest information on gender equality, and where you can contribute by sharing your news and data!